You’ve no doubt seen the footage of the United Airlines flight where a customer was dragged off the plane. The fascinating customer service lesson is how a company the size of United was so oblivious to the ramifications of mistreating a passenger. As you know, airlines often offer cash incentives for passengers to take later flights. In this case no one took the $800 offer, so United ordered a random passenger to leave. What they didn’t do was offer significantly more money. Do you suppose if they’d offered $5,000 then at least one passenger would have opted for a later flight? Me too. What you may not know is within 3 days of the social media frenzy United’s stock value had 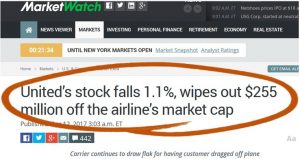 dropped by $255 million! In other words, they could have spent 5k and saved $255 million. In today’s world of social media, organizations can’t afford – literally – to merely do what’s legal. They need to focus on doing what’s right.