Change One Word and Sell 78% More 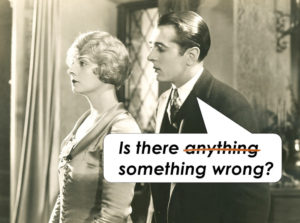 Imagine changing one-word and having it boost your business. It comes from a study I found out about from Dr Rumeet Billan. She was presenting at the Cdn Assoc of Professional Speakers virtual convention.

My sense is that asking about anything is so general in nature that it comes off as though we have no idea that there’s a problem. On the other hand, by asking if there’s something else, we are being specific. It implies we already assume there is an issue, and we just need to identify it. In essence, we are meeting the person halfway.

So next time you’re talking to a customer after they’ve made a buying decision, rather than asking the conventional, “Is there anything else…?, Instead ask, “Is there something else…?” The second phrase is significantly more likely to get them talking. Speaking of which, at home when a friend or family member is giving non verbal clues that they’re not doing well, rather than asking, “Is there anything wrong?”, instead try, “Is there something wrong?” Big difference for changing one word.