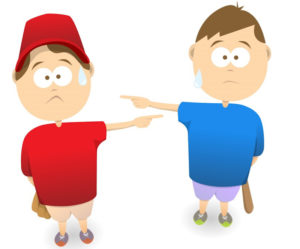 Question: at work when an unpopular policy has been announced, have you or whoever introduced it – rather than explaining or justifying the policy – simply blamed head office?

The message to the local team is, I know this is unwelcome/ unnecessary/ stupid but senior management sitting in their disconnected ivory tower has issued a royal decree, and our job as
serfs is to comply. Even if it makes no sense.

This happens a lot in companies. Branch managers don’t want to take the heat from local employees about an unpopular decision. It’s easier to just blame head office. But consider the damage.

Employees feel like “the company” doesn’t really understand employee challenges out in the field. And if they (senior managers) do understand, they obviously don’t care. Imagine what that does to morale, turnover, and overall teamwork. Corporate silos become more entrenched. A ‘them vs us’ attitude becomes part of the culture. Meanwhile, one of our greatest management challenges is recruiting and retaining staff.

To prevent this fallout from an unpopular decision, consider the comment of a vice president who had brought me in to speak at his annual managers meeting, which included branch managers. “We are all HEAD OFFICE”, he pointedly stated as he gestured to the entire conference room. His message was that anyone in a management/ supervisory role anywhere represents head office. “It’s every manager’s role everywhere to explain why corporate decisions are made.” He continued, “If you don’t understand or agree with a decision, call us first and we’ll take all the time needed to explain it, so you can do the same with your team. But don’t ever just pass a decision off as something insisted upon by head office. Again, we are all head office.”

Speaking of ‘head office’, one of my clients, a senior exec in a multinational manufacturing firm, told me they consciously stopped using that term. They didn’t like that ‘head office’ made it sound more important than the branches. They merely switched the term to ‘home office.’ Simple and smart.